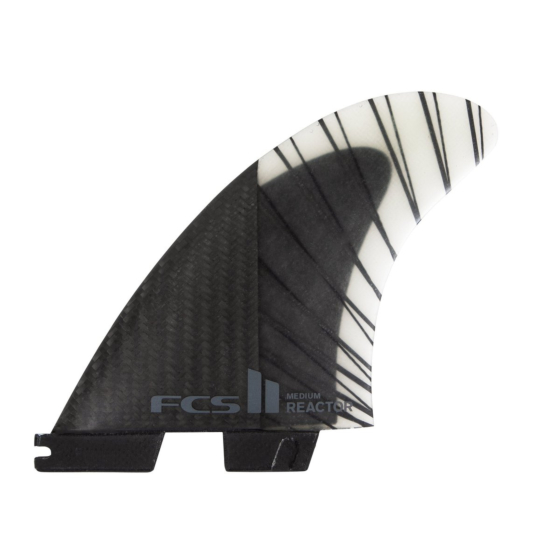 Be the first to review this product
Eligible for FREE SHIPPING!
$114.95
Availability: Out of stock
SKU
FCSFREACC03TSL

The new PC Carbon Essential Series utilizes a superior blend of carbon tissue and an ultralight AirCore construction to deliver a more user-friendly flex to achieve faster start up acceleration, and a smoother feel through turns. These fins are designed for speed and tight turns, with added tail release. The upright template allows for tighter, more acute directional changes. A smaller center fin for increased pivot and tail release. Ideal for surfers who like to perform fast, progressive turns and suitable for hollow waves, particularly good for beach breaks.

These fins are designed to fit the FCS II Fin System and are recommended for performance shortboards with moderate-to-low rocker.

Often referred to as PC Carbon or PCC, these fins are highly responsive and feature strategically placed carbon that’s designed to complement the fin template. PCC fins suit fast surfing and are favored by power surfers who like to perform explosive turns on critical parts of the wave.

The new PCC Essential Series fins have been constructed using AirCore technology, which is a pressed polyurethane foam core that mimics the geometric foil of the fin. AirCore results in a much lighter fin with total manipulation of the flex.

The internal carbon framework is designed specifically to suit each template, and by switching to epoxy resin and adding a carbon twill to the base a more user-friendly flex pattern is created. Stiffness in the lower half of the fin enhances drive and acceleration from take-off, and a softer flex through the top half of the fin results in a smoother and more predictable feel when turning.

Write Your Own Review

If you are not 100% satisfied with your purchase you may return it for a full refund, or exchange within 30 days of receiving your order.

Returns are easy! We understand that in some situations returns or exchanges may be necessary. We also want you to be stoked on your purchase. If you are not 100% satisfied with your purchase you may return it for a full refund, or exchange within 30 days of receiving your order. Items must be in new condition with original tags and packaging.